The Japanese particle “wo” (o): What it is and how to use it 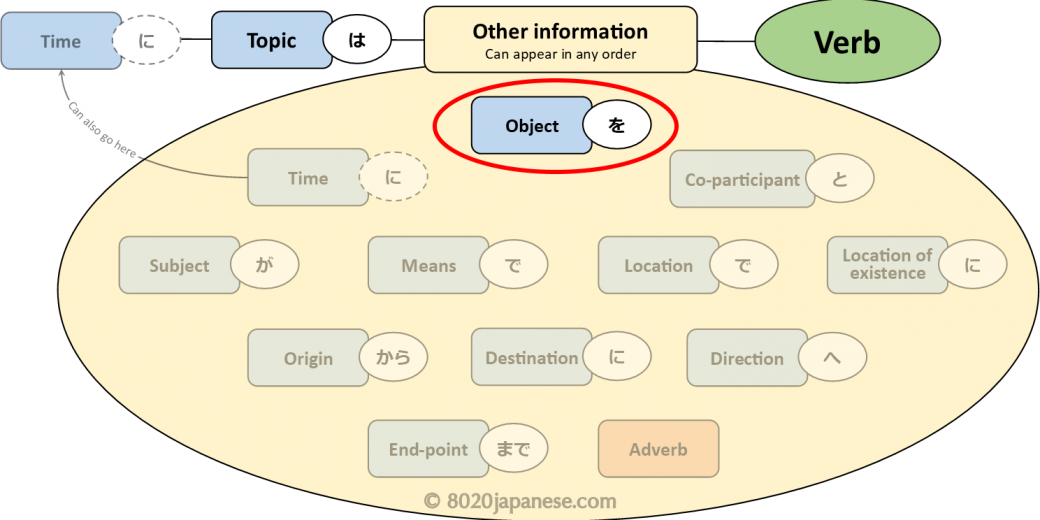 The particle “wo”「を」 is one of the most common and useful particles. It is also one of the simplest to understand.

This is great for two reasons:

In this article we will look at what “wo”「を」 is, how to use it in a sentence, and a few things to be careful of. We’ll also touch on some more advanced concepts that give some insight into the bigger picture of the Japanese grammar system.

Table of Contents
What is “wo”「を」?
Comparing “wo”「を」 with English
More complex objects
Things to be careful of with the particle “wo”「を」
Some verbs can’t be used with “wo”「を」
The object doesn’t always have to be stated
The need for objects in English
Some verbs don’t work like their English counterparts
Key Takeaways

The purpose of “wo”「を」 is quite straightforward:

The particle “wo”「を」, usually pronounced “o”, marks the object of the verb – that is, the person or thing that the action is done to.

It appears in our sentence structure diagram in the “Other information” section, as shown:

(If you haven’t seen this before, read here.)

Let’s look at an example:

Here, “wo”「を」 comes after “sushi”「すし」, and this tells us that sushi is the thing that was eaten.

The same applies regardless of what action is being described. Whatever comes before “wo”「を」 is the thing the action was done to.

The book is the thing that was read, and we know this because “hon”「」 is followed by “wo”「を」.

Again, because “wo”「を」 comes after “jitensha”「」, we know that it was a bike that Taro bought.

Comparing “wo” with English

You may not really think about it often, or at all, but the concept of the “object” in terms of Japanese grammar is the same as in English. The only real difference is how it is used in a sentence.

In English, the object always comes after the verb, usually directly after. That was the case in each of our examples. Here’s the first one again:

“Sushi” comes after the verb, “ate”, so it is the sushi that the act of eating was done to.

In English, it is the word order that tells us this.

If we re-arranged those three words, the meaning would change, or not make sense at all…

In Japanese, regardless of what order the words appear in, the thing directly before “wo”「を」 is the object of the verb – that is, the thing the action was done to.

The examples so far have been very simple sentences with very simple objects. Let’s look at an example with a slightly more complicated one.

Here, instead of being a single word, the object is a phrase consisting of two words – “omoshiroi”「い」 and “eiga”「」. This brings us to an important point:

The “object” of a sentence is one “thing”, not necessarily a single word.

“Thing” in this context could be anything, or even multiple things that are grouped together.

In this example, that “thing” is “omoshiroi eiga”「い」, or in English, “an interesting movie”. This is what the particle “wo”「を」 applies to.

Here it is in our diagram:

As a whole, “omoshiroi eiga”「い」 is what we call a noun phrase.

A noun is a single word that refers to something, like “book” or “movie”. A noun phrase is simply any phrase that, as a whole, refers to a single “thing” as described above.

The particle “wo”「を」, therefore, can take any noun phrase, no matter how complicated, and turn it into the object of a verb.

Let’s now look at an example of a more complex noun phrase. This is more advanced in a few ways, so don’t worry too much if it doesn’t make sense to you. This is mostly to highlight the fact that the object can be far more complex than a single word.

Taro watched an interesting movie that was recommended by a friend.

Here, the object is “tomodachi ni susumerareta omoshiroi eiga”「にめられたい」, or “an interesting movie that was recommended by a friend”.

That whole noun phrase is what “wo”「を」 applies to.

There are a number of ways that noun phrases can be formed, but the last word in any noun phrase will always be a noun.

If you want to learn more about simple and complex noun phrases and all of the different ways of forming them, Chapter 10 of my book covers them in detail.

Things to be careful of with the particle “wo”「を」

Although “wo”「を」 is fairly straightforward by itself, there are a few things that it may help to be aware of.

Some verbs can’t be used with “wo”「を」

First of all, it’s important to recognize that not all verbs can take an object.

Some actions invariably involve someone doing something to something else. For example, when you read, there must be something that you are reading. The same is true when eating, watching, buying, etc.

However, some actions can never have an object, meaning there isn’t something that the action is done to. Here’s an example:

Some verbs simply do not take objects, and should therefore never be associated directly with the particle “wo”「を」.

The object doesn’t always have to be stated

On a related note, just because a verb can take an object does not mean that it must.

Let’s use the “eat” example again. When we eat, we always eat something, but we don’t necessarily need to specify what that is. In both English and Japanese, we can simply say:

We can add an object if we want to, but we don’t have to. Something can be involved in an action without explicitly being spoken of.

This exclusion of objects is actually even more common in Japanese than it is in English. Japanese relies heavily on context, meaning that if it is known, for example, that we are talking about “sushi”, we can effectively say, “Taro ate sushi,” without even mentioning an object.

English handles this a little differently. Here’s a short dialogue that illustrates this.

The sushi is gone!

Notice the difference between the English and Japanese versions of Kenta’s response?

In English, Kenta says “it”, referring to the sushi, but in Japanese, he doesn’t refer to the sushi at all.

In both cases, it is understood what has been eaten, but English requires us to include an object (in this case “it”) when there is one specified*.

We use “it” in order to meet this requirement without also being absurdly repetitive. Without “it” and other pronouns, we would constantly be referring to things by name.

Japanese, however, doesn’t have such a requirement. If the object (or any other information, for that matter) is understood from context, we can just omit it, like Kenta has done.

*The need for objects in English

Allow me to clarify something.

In the space of a few paragraphs I have said that English requires us to include an object when there is one specified, while also giving an example that appears to break that rule: “Taro ate.” This seems contradictory, but it’s not.

There is a subtle but important difference between the following two sentences:

The first describes a general action that Taro performed – that he ate. The second refers to a specific thing and explains that Taro ate it. These are not the same. If we modify our earlier example, we can see why:

The sushi is gone!

The English here just sounds wrong. By not saying “it”, it sounds like Kenta is just changing the topic and making a general statement that Taro has had food. However, if Kenta wants to refer to the sushi as the thing Taro ate, he must include “it”.

So, like I said – if talking about a specific object, that object must be included in English.

How does this affect Japanese? Well, it doesn’t, but it may affect how you interpret Japanese.

As an English speaker, you are used to objects being included every time they are present – either directly, or via pronouns like “it”. But both versions of the above dialogue are exactly the same in Japanese, even though their English translations are different.

So, just keep in mind that many verbs can be used with or without an object, but even when no object is specified (using “wo”「を」), it is possible that the sentence is actually talking about a specific object. Of course, it could also just be a more general statement (like “Taro ate.”).

In most situations, it should be fairly obvious from context.

Lastly, there are a few situations where something that might be considered an object in English is not an object in Japanese. This is mostly limited to a few particular verbs. Here’s an example:

The verb “norimasu”「ります」, meaning “to ride”, treats the thing that is being ridden not as an object, but as a destination. “Norimasu”「ります」 can’t really take an object, so “wo”「を」 should never be used in direct connection with it.

This seems a bit unintuitive coming from English, since we would say that Taro “rode the train” using the same syntax as when we say “Taro ate the sushi”. It is just one of those little peculiar differences between how each language phrases certain descriptions.

Another example of this is the word “omoimasu”「います」, meaning “to think”.

In an English sentence like, “I think Taro ate the sushi”, it might look like the phrase, “Taro ate the sushi” is the object of the verb “think”. It’s not, but it kinda looks like it might be, since it comes after “think” and is the thing that is being thought.

Importantly, however, in Japanese the equivalent phrase would not be marked by “wo”「を」 because it is not treated as an object. Instead, we would use the quoting particle “to”「と」. Let’s see:

I think Taro ate the sushi.

The role of “wo”「を」 is fairly straight-forward:

The particle “wo”「を」 marks the object of the verb – that is, the thing the action was done to.

To use it correctly, we just need to understand a few simple concepts, and be careful of a few exceptional situations:

How to use the particle NI for destinations, locations and time

The Japanese particle “de”: When and how to use it correctly

The Japanese particle “ga”: What it’s for and when to use it (and not “wa”)

Japanese Expressions of Time (and when to use the particle “ni”)