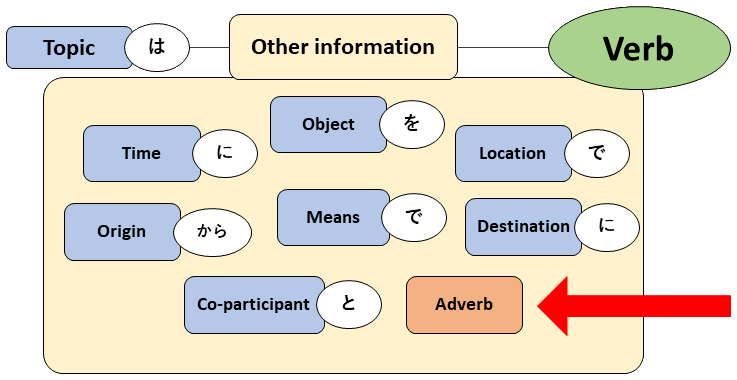 Once you have a solid understanding of Japanese sentence structure, one of the easiest ways to add a bit more description to your sentences is with the use of adverbs. 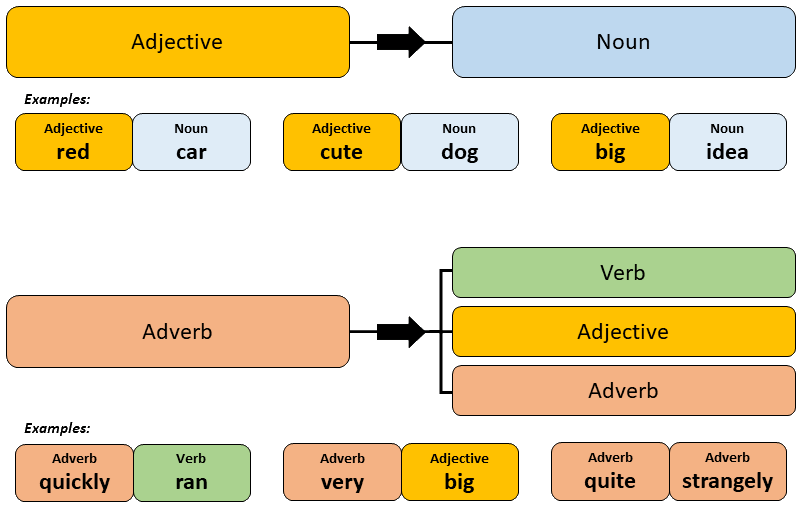 In this article, I’ll go over the various aspects of Japanese adverbs, including types of adverbs, how to form them, and perhaps most importantly, how to use them in a sentence. Let’s get to it.

Most adverbs are related to adjectives with a similar meaning, and if you know one, it’s easy to figure out the other. The same is true in English, where many adjectives can be turned into adverbs by changing them slightly to end in “ly” (eg. quickly, easily, quietly etc.).

In Japanese, with only a couple of exceptions, we can convert adjectives into adverbs by doing one of two things, depending on the type of adjective we’re dealing with. Here’s how: 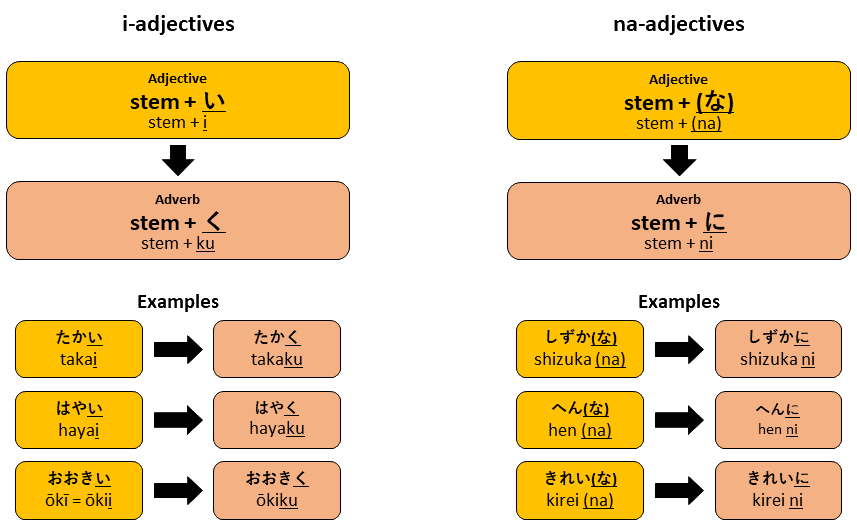 If you are not familiar with i-adjectives and na-adjectives, it’s pretty simple.

Na-adjectives almost always end in something other than “i”「い」, although there are a few exceptions (eg. kirei (na)きれい（な） = pretty/clean). We distinguish between these types of adjectives because they are modified differently in different situations, such as in the diagram above.

If you want to learn more about this, I recommend checking out my book where I cover all of this and a whole lot more.

Also, we mustn’t forget one of the most common adjectives, “ī”「いい」. This also takes the form “yoi”「い」, and when converting to an adverb, this is the form we must use. The result is as follows:

As noted above, “yoku”「よく」 can also mean “often”, and regardless of its meaning, it is usually written in hiragana, not kanji.

In addition to these adjective-related adverbs, there are some adverbs that don’t have an obvious adjective cousin. Here are some of the more common ones:

Some expressions of time are also adverbs, particularly those that describe frequency such as the following:

It helps to remember these as adverbs because then, once you know how to use adverbs in a sentence, you can easily apply the same rules to use these time expressions in a sentence too, or vice versa.

Using Japanese Adverbs in a Sentence

How we use adverbs in a sentence in Japanese varies according to the answer to this question:

What type of word is the adverb modifying?

As we saw in the very first diagram above, adverbs can be applied in one of three word types:

Let’s look at each of these separately, then bring it all together to see how we can use all three in a single sentence.

We’ll start with adjectives because they are relatively simple.

When an adverb is adding a description or emphasis to an adjective, it will usually appear immediately before the word it’s modifying.

This is almost exactly the same as English, and because of the nature of these words it should be fairly intuitive. Here are some examples:

Hokkaido’s winters are quite cold.

She read a very interesting book.

It is possible to place the adverb elsewhere in situations like this, but it’s far less common, and would add a great deal of confusion for very little gain. It is therefore beyond the scope of this article. Just keep in mind that there are a few situations where the adverb might appear slightly earlier.

Here are a few of the more common adverbs that can be used with adjectives:

You may notice that most of these adverbs were introduced earlier as those that do not have an obvious related adjective.

To see how we can use adverbs to add description to an action, let’s start with an adverb-free example sentence:

He ran to school.

Using our sentence structure model from this article, we can draw this sentence as follows:

An example of a verb-modifying adverb being applied to this sentence would be if we wanted to say that he ran quickly, or “hayaku”「く」.

How would we add this information?

The verb-modifying adverb element can actually just be added to the sentence structure diagram like so: 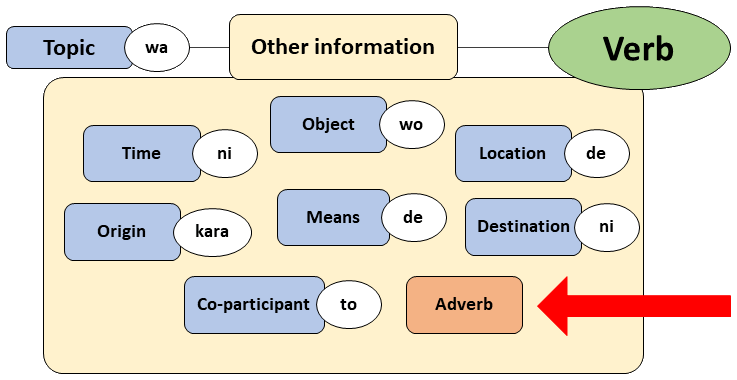 Since these adverbs sit alongside other noun+particle pairs, they can be placed basically anywhere between the topic (defined by “wa”「は」) and the verb, just like the other elements.

So, if we want to add the word “quickly” to our simple example sentence, it would look like this:

The sentence can therefore be expressed in either of the following ways:

Both of these are correct and have essentially the same meaning.

Also, if we were to add more elements, the same word-order freedom would still apply. For example, if we added a co-participant (eg. “with his friend” / “tomodachi to”「と」), then this, “hayaku”「く」 and “gakkō ni”「に」 could be arranged in any order and the fundamental meaning would be the same.

That does not, however, mean that they are exactly the same. The word order affects where the emphasis lies, so as with any sentence, some word-orderings are more natural than others.

How do we know which order is more natural?

A general rule of Japanese sentences is that, usually, new or important information appears towards the end of the sentence.

If we apply this to our example above, it means that the second option – where “hayaku”「く」 comes immediately before the verb – places more emphasis on the speediness of his running than the first option.

The difference in emphasis may be more obvious with an example that uses a frequency adverb, like this:

Okubo-san reads the newspaper every day.

Every day, Okubo-san reads the newspaper.

The first example above places a bit more emphasis on the fact that Okubo-san reads the newspaper every day.

The second sentence doesn’t carry that emphasis, and almost suggests that reading the newspaper is just one of many things that Okubo-san does every day.

Ultimately, regardless of where we place the adverb, the fundamental meaning is the same, and the difference is subtle enough in most cases to not really matter. If you just want to be able to use adverbs in a way that is grammatically correct, it’s not worth concerning yourself too much. Over time, you should develop a natural feel for where the “best” placement is. Until then, my recommendation would be to use it immediately before the verb.

A couple of things to be careful of

Firstly, even though “desu”「です」 is actually a verb, it is different to other verbs in that it describes a state of being, rather than an action. For this reason, we cannot use adverbs to modify “desu”「です」 the way we would use them with verbs describing actions.

This should be fairly intuitive, since we’re not likely to feel inclined to say something like, “Hokkaido’s winters are cold quickly.” It simply doesn’t make sense. In both Japanese and English, we would only want to use adverbs like this with verbs that describe an actual action.

Secondly, if we look back at our sentence structure diagram… 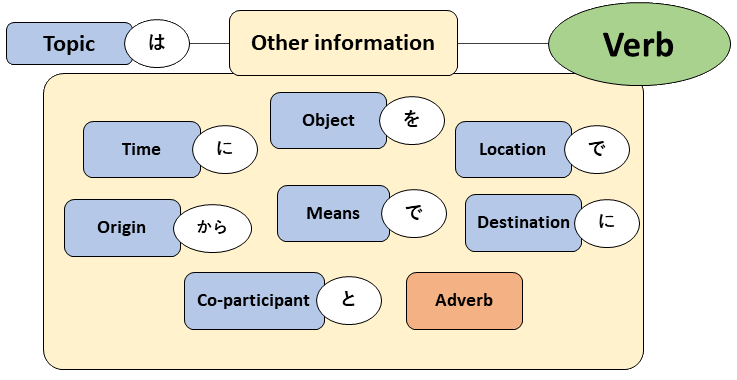 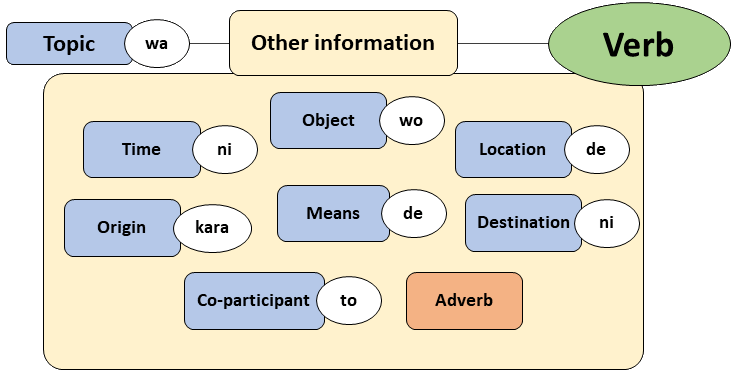 …it is important to note that an adverb should never be placed in between one of the major elements and its associated particle. Particles are essential to helping us understand the role each piece of information plays in the action, so placing an adverb in between a major element and its particle will, for lack of a better term, “break” the sentence.

Also, the adverb will usually come after the subject, even though these appear on the same level in our diagram. Technically, you could put an adverb before the subject, but this is more likely to sound unnatural.

Now that we know how to use adverbs with adjectives and verbs, we are ready to see how we can use another adverb together with these adverbs to add even more description.

We can see how this works if we extend our adverb relationship diagram like so:

It may look like it is possible to expand this further and string an infinite number of adverbs together, but this isn’t really an option because of the two different types of adverbs we have seen – those that define degree or magnitude, and those that are themselves descriptive.

It generally doesn’t make much sense to combine two adverbs of degree or magnitude (eg. “very a bit”).

As such, if we want to combine two adverbs, we would normally only do this with one from each category. A better representation of the relationship between these word types would therefore look like this:

The circled parts below represent what we covered in the previous two sections:

The only thing left to do is apply adverbs of degree or magnitude to descriptive adverbs:

As in English, we do this in exactly the same way as we do with adjectives – place the adverb immediately before the word it is modifying. These examples illustrate this:

Combining all of these uses in a single sentence

Now that we’ve covered the different types of adverbs and how to use them, let’s bring it all together and see how we can combine them all into a single sentence.

To do this, it is important to understand that adverbs that modify adjectives and other adverbs are actually just one small piece of a larger sentence element.

Let’s look at one of our examples from earlier:

She read a very interesting book.

So, although in our example sentence it may just look like “hon”「」 is marked by the particle “wo”「を」, in reality, what she read is a “totemo omoshiroi hon”「とてもい」. This phrase as a whole is the object of the verb “yomimashita”「みました」, so it is this whole phrase that is in fact marked by “wo”「を」. It fits into our sentence diagram like this:

This is just the beginning of the different ways that noun phrases can be formed and used to make our sentences more descriptive. My book covers noun phrases in detail.

The next part is easy.

If we want to add another adverb that applies to the whole action, we can just do so by including it in the ‘other information’ section as we did before, like so:

This sentence can therefore be expressed in either of the following ways:

What if we want to say that she read very quietly?

We just need to expand the verb-modifying adverb (shizuka niしずかに) to include this information, like so:

A final note about “correctness”

Japanese speakers (native or otherwise) often make grammatical mistakes by using adjectives when they should technically use adverbs (I won’t go into specifics, but the same thing occurs in English all the time).

One very common example involves the word “sugoi”「すごい」 (≈ great). Young people in particular tend to use this adjective before other adjectives to say things like “sugoi omoshiroi”「すごいい」 (often pronounced “sugē omoshiroi”「すげーい」), which translates to something like “great funny”. What they mean to say is “very funny” or “so funny”, but to do that they should – technically – use the adverb “sugoku”「すごく」 (≈ greatly). Does that make it wrong? Grammatically, yes, but it’s very common and everyone understands it, so that arguably doesn’t matter; just try not to use it outside of very familiar settings.

In any case, the point here is simply that, with anything, if you hear something that seems inconsistent with your understanding of the language, don’t necessarily assume that your understanding is wrong. Of course, by the same token, don’t necessarily assume that what you heard is wrong, either. In other words, don’t assume anything. If you’re not sure of something, look it up.

Hopefully you now have a fairly clear understanding of how to form adverbs in Japanese, as well as how and when to use them.

Here are the most important things to remember from this lesson:

The Japanese particle “wo” (o): What it is and how to use it

The Japanese particle “ga”: What it’s for and when to use it (and not “wa”)

Japanese Expressions of Time (and when to use the particle “ni”)